The third stage of public consultation about the renovation of  The Meadows will take place throughout October. The Town Council would like to invite all residents to offer their views on the proposed layout and design features.

The proposals will be available to view on this website, along with a feedback survey from 1 October until the end of the month. The Town Council will launch the consultation at the Farmers Market on 1 October and the Tuesday Market on 4 October when it is hoped residents who are able will attend and view the proposed design and information panels in person. These consultation panels will then be available to view in the vestibule of the Town Hall from 10-31 October.

(Select the following link for the consultation information and survey online: Meadows Consultation)

UPDATE:  An ecological survey is now taking place across The Meadows. The site will be monitored throughout the spring, into the summer and at various points across the year. This survey will identify all significant flora and fauna and help us ensure any changes we make do not negatively effect the existing ecological landscape.

The Wirksworth Archaeological Society are beginning work in the NE corner again this spring. Watch this space for updates. ( If you’d like to help the society, contact them via their website: www.wirksworthromanproject.co.uk )

A designer has now been appointed and if all goes to plan with the surveys, this autumn we hope to hold a final public consultation with proposed designs on show for the first time… Watch this space.

The results of last years second public consultation about The Meadows have now been published. Please select the following link to see the summary document. Copies will be available to read in the library from Tuesday 1 March.

Over 300 residents responded to our survey and the results helped to refine the ideas which came through from the first consultation. The council will now work with designers to draw up potential designs and a final (in-person) public consultation will take place later in the year.

The remains of a Saxon building, unknown until now, have been discovered by Wirksworth Archaeological Society members working in the Meadows.

The society began its archaeological survey in 2020. Initial aerial photographs and satellite images didn’t prove particularly useful, as trees hid much of the area. But a few potentially interesting features were identified, and the society began by investigating a possible earthwork, known locally as the Tump – which at first appeared to be simply a large deposit of clay.

Work started on a ditch along the east boundary. At 12 metres wide and more than three metres deep, the causeway ditch is much bigger than would be needed as the boundary of a garden, or even a simple town boundary. The society suggests this might turn out to be an ancient defensive boundary, but further investigation is needed to determine its date and original profile.

At the edge of the ditch, however, the dig uncovered a line of stones that had once formed part of a structure. Further excavation revealed part of the foundations and remains of a building, which appears to have had stone and clay foundations, a clay floor, stone walls and a sandstone roof. Fallen stone surrounding the building is thought to have come from its collapse, and sandstone slates and nails were found lying over the foundations. Although much of the material is local rough stone, there are several large pieces of dressed gritstone, possibly taken from the remains of another building that once stood nearby.

The surviving north and west walls suggest the excavated building was about 4m by 5m, about the size of a large living room in a modern house. Much of the east side had been dug away to make room for a Victorian sewage pipe.

Pottery found on site dates to 950AD-1250AD or a little later – 1300AD at the latest. This suggests that the building originated in the late Saxon period, and continued in use to the early medieval, a date range about 150 years either side of the Norman conquest.

Remains of this date are not common, although we do know that Wirksworth was an important Anglo-Saxon centre. A charter dated 835AD refers to Wirksworth as a town; St Mary’s church was an important Christian site at this period; and the Domesday Book of 1086 lists Wirksworth as a royal possession with the second largest population in Derbyshire. So it isn’t altogether surprising to find something of the Saxon period here.

The building appears to have had an indoor water supply. Running down the west side of the building is a stone-lined channel that serves a culvert inside the north wall. Indoor water is quite astonishing for its time, and suggests that the building was not domestic.

In the winter the site will be backfilled and made safe, but some of the stonework may be left exposed for people to see. Wirksworth Archaeological Society plans to carry out further work on the site in the spring to investigate what the building was used for. If you would like to get involved, or hear more about future work, please get in touch at wirkswortharchaeological@gmail.com, or visit www.wirksworthromanproject.co.uk.

[With thanks to Anton Shone and Community Fayre. Edited]

Thank you to all of those who took part in our second consultation, we received over 300 responses! Bookmark this page for updates about the results of the consultation and future potential designs.

The Town Council is now looking to refine the ideas received in our first consultation.

Please help us by clicking the link below and  completing the short survey:

The first Meadows consultation has now closed, thank you to all those who contributed. The summary document is now available to view and download. Read more here:

For 6 weeks, until the end of April 2021, the first phase of consultation regarding the future use of The Meadows has re-opened. Click the following link to be taken to the main Meadows page for further information: The Meadows public consultation

Work to commence a second phase of consultation regarding the Meadows was unfortunately postponed in March at the onset of the pandemic. However some minor works have continued in the intervening period and this includes tree works and archaeological surveys. 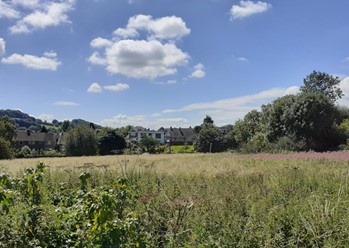 The Wirksworth Archaeological Society spent much of the early summer analysing the area known locally as ‘The Tump’, the raised area to the north-west of the Meadows. The image to the left is taken from the Tump looking towards Summer Lane.

Following several painstaking investigations, which yielded [tellingly] few finds, this work indicated that the Tump was the result of human endeavour rather than the natural land level; it was concluded this area was perhaps not an archaeological site. Most likely this site was used to dump clay removed from the adjacent Yokecliffe estate at the time of its construction. So, a reminder archaeology takes into account more recent history too and this is attested to by the fact that archaeologists were able to confirm that mowing of the Meadows stopped in the early 1990s through their most modern finds. These included balls of all shapes and sizes and quarter vodka bottles but no alcopop bottles (in other public places a common find) which were not introduced into this country until 1995!

Beneath the clay on the Tump there was one interesting find, a sherd of pottery, believed to be North Gaulish White Ware, dating from Roman Britain of the first century. The Society intends to return to the Tump at the end of the rest of its work in order to make sure of their provisional opinion about it. 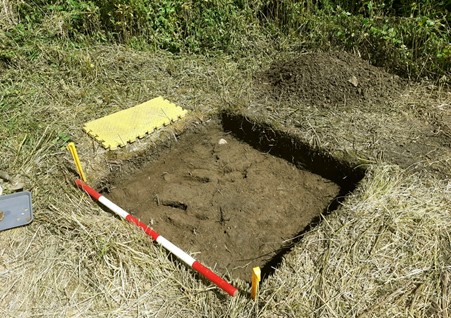 In the autumn the Archaeological Society refocussed their efforts upon the east side of the Meadows to investigate the ditch there and confirm, if possible, the belief it may date back to Medieval period. This work will continue but is delayed, of course, by current events. 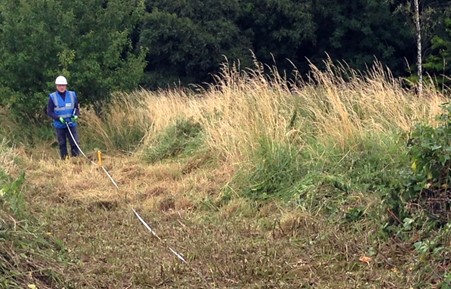 See our Meadows consultation page for information on how children can contribute to the consultation during Lockdown.

Wirksworth Archaeological Society will be undertaking an exploratory survey, they will be investigating a structure revealed on LIDAR (scan attached here).

The Town Council has engaged an Arboriculturist who has undertaken a safety survey of the trees currently on the Meadows.

Two trees have been identified that require remedial works. The council will be engaging a local tree surgeon to make both trees safe.  If possible, the main trunks will be left in place to retain wildlife habitat, and habitat piles will be created adjacent to each tree.

A locked noticeboard has been erected on the Meadows – at the fork of the two footpaths at the top (NE) end of the space. This will be used to provide updates on all matters Meadows related including the consultation process.

The council has engaged a surveyor to prepare a topographical survey of the space to aid in the consultation process.

Stoney Wood is Wirksworth’s Millennium woodland planted in the area recovered from Stonecroft Quarry. The land on which the wood is planted was donated by Tarmac Ltd to Wirksworth Town Council. The original planting was started by Tarmac but later sections were planted by local adults and children in a project …

We have  two buildings with rooms to hire on an hourly basis, and the newly renovated Fanny Shaw’s Community Building (FSCB) which is operated on a key loan system.

Memorial Hall:- the Hall & Kitchen are available to hire for meetings, parties, fayres, events and classes/groups, during the day & evening during week days and weekends.

Fanny Shaw’s:- Community building key available free of charge for use by groups such as: parents, schools, nurseries, scouts & not-for-profit groups holding events on the park.